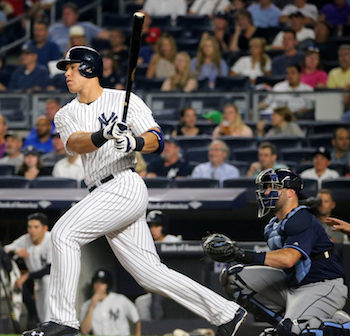 This is Aaron Judge. Judge is one of the physically largest players in Major League Baseball standing 6 feet 7 inches (2.01 m) tall and weighing 282 pounds (128 kg). He also hit the hardest home run ever recorded. How do we know this? Statcast.

Statcast is a state-of-the-art tracking system that uses high-resolution cameras and radar equipment to measure the precise location and movement of baseballs and baseball players. Introduced in 2015 to all 30 major league ballparks, Statcast data is revolutionizing the game. Teams are engaging in an "arms race" of data analysis, hiring analysts left and right in an attempt to gain an edge over their competition. This video describing the system is incredible.

In this notebook, we're going to wrangle, analyze, and visualize Statcast data to compare Mr. Judge and another (extremely large) teammate of his. Let's start by loading the data into our Notebook. There are two CSV files, judge.csv and stanton.csv, both of which contain Statcast data for 2015-2017. We'll use pandas DataFrames to store this data. Let's also load our data visualization libraries, matplotlib and seaborn.

2. What can Statcast measure?

The better question might be, what can't Statcast measure?

Starting with the pitcher, Statcast can measure simple data points such as velocity. At the same time, Statcast digs a whole lot deeper, also measuring the release point and spin rate of every pitch.

Moving on to hitters, Statcast is capable of measuring the exit velocity, launch angle and vector of the ball as it comes off the bat. From there, Statcast can also track the hang time and projected distance that a ball travels.

Let's inspect the last five rows of the judge DataFrame. You'll see that each row represents one pitch thrown to a batter. You'll also see that some columns have esoteric names. If these don't make sense now, don't worry. The relevant ones will be explained as necessary. 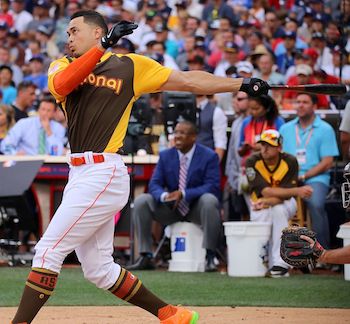 This is Giancarlo Stanton. He is also a very large human being, standing 6 feet 6 inches tall and weighing 245 pounds. Despite not wearing the same jersey as Judge in the pictures provided, in 2018 they will be teammates on the New York Yankees. They are similar in a lot of ways, one being that they hit a lot of home runs. Stanton and Judge led baseball in home runs in 2017, with 59 and 52, respectively. These are exceptional totals - the player in third "only" had 45 home runs.

Stanton and Judge are also different in many ways. One is batted ball events, which is any batted ball that produces a result. This includes outs, hits, and errors. Next, you'll find the counts of batted ball events for each player in 2017. The frequencies of other events are quite different.

So Judge walks and strikes out more than Stanton. Stanton flies out more than Judge. But let's get into their hitting profiles in more detail. Two of the most groundbreaking Statcast metrics are launch angle and exit velocity:

This new data has changed the way teams value both hitters and pitchers. Why? As per the Washington Post:

Balls hit with a high launch angle are more likely to result in a hit. Hit fast enough and at the right angle, they become home runs.

It appears that Stanton hits his home runs slightly lower and slightly harder than Judge, though this needs to be taken with a grain of salt given the small sample size of home runs.

Not only does Statcast measure the velocity of the ball coming off of the bat, it measures the velocity of the ball coming out of the pitcher's hand and begins its journey towards the plate. We can use this data to compare Stanton and Judge's home runs in terms of pitch velocity. Next you'll find box plots displaying the five-number summaries for each player: minimum, first quartile, median, third quartile, and maximum.

6. Home runs by pitch location (I)

So Judge appears to hit his home runs off of faster pitches than Stanton. We might call Judge a fastball hitter. Stanton appears agnostic to pitch speed and likely pitch movement since slower pitches (e.g. curveballs, sliders, and changeups) tend to have more break. Statcast does track pitch movement and type but let's move on to something else: pitch location. Statcast tracks the zone the pitch is in when it crosses the plate. The zone numbering looks like this (from the catcher's point of view): 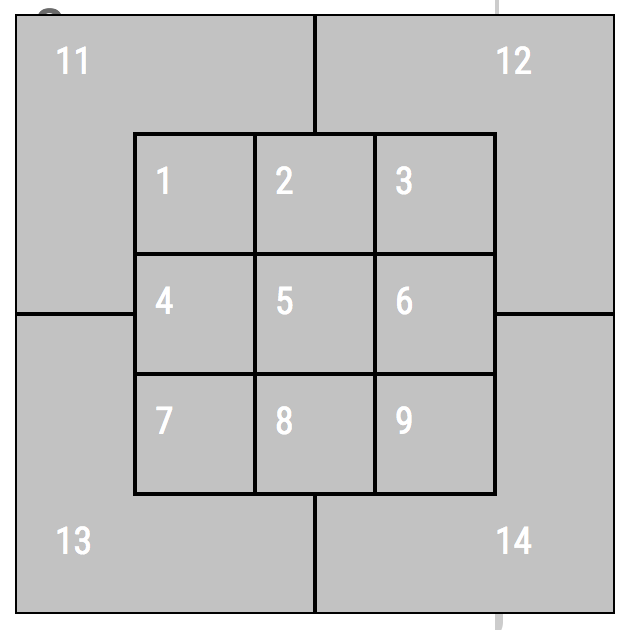 We can plot this using a 2D histogram. For simplicity, let's only look at strikes, which gives us a 9x9 grid. We can view each zone as coordinates on a 2D plot, the bottom left corner being (1,1) and the top right corner being (3,3). Let's set up a function to assign x-coordinates to each pitch.

And let's do the same but for y-coordinates.

Now we can apply the functions we've created then construct our 2D histograms. First, for Aaron Judge (again, for pitches in the strike zone that resulted in home runs).

And now for Giancarlo Stanton.

10. Should opposing pitchers be scared?

The grand takeaway from this whole exercise: Aaron Judge and Giancarlo Stanton are not identical despite their superficial similarities. In terms of home runs, their launch profiles, as well as their pitch speed and location preferences, are different.

Should opposing pitchers still be scared?